American made kitchen tools with a lifetime warranty! 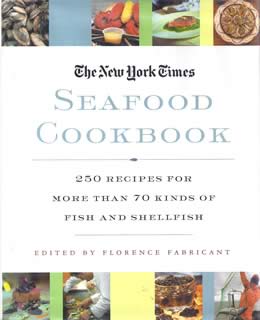 The New York Times is known for their outstanding cookbooks, and this one is no exception. It boasts that it contains 250 recipes for more than 70 kinds of fish and shellfish. Recipes are organized by the type of fish or shellfish you want to cook. The fish types alone are enough to entice anyone that loves to cook to buy the book. They include all of the commonly found fish, such as flounder, cod, salmon and mackerel. It's the lesser known species that are the temptations; arctic char, blackfish, cobia, croaker, porgy and a ton more!

The shellfish recipes certainly include favorites for crab, lobster and shrimp. But they also include great dishes for barnacles, conch, langoutines and sea urchins. If it swims in the sea, there's bound to be a recipe in here for it.

Recipes have provenance from some big name seafood chefs like Mario Batali, Dave Pasternak and Alain Ducasse. They also come from restaurants famed in the world of seafood magic like Prejan's in Louisiana, and Steak Frites and La Cote Basque in New York City.

This is one of the best truly regional cookbooks, concentrating on the recipes of northern Florida, that you're apt to find on the market. From Conch Fritters to Grouper with Fresh Salsa, the variety of seafood recipes in this cookbook knows no bounds. Gourmet Magazine had this to say about Seasonal Florida: "This labor of love shows an amount of care and intelligence that puts some well-known regional cookbooks to shame and has large dollops of personality and patriotism as well."

The main part of the cook book is organized by courses, such as appetizers, soups, and entrees. If you have a hankering for days gone by in the south, the section on "Old-Timey Favorites" will warm your heart. If you catch your own fish and seafood, you'll be pleased to see recipes for fish species that aren't normally sold in stores, such as Trigger Fish with Shrimp, Cobia with Dill Sauce, Fried Mullet, and Grecian Style Broiled Pompano.