Whether you crave killer sardines or the best Italian tuna in oil, we have have it! Sometimes it's just nice to treat yourself to gourmet imported food!

Come experience the differences in tuna! This is NOT your typical American canned tuna - oh no! This is premium quality yellowfin or albacore tuna fillets lovingly preserved in high quality olive oil. 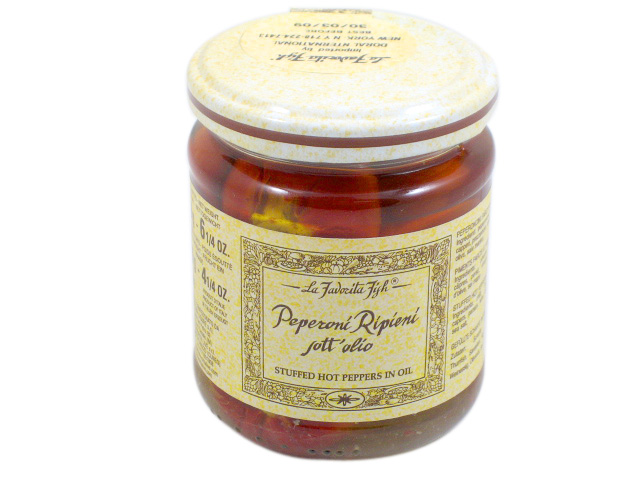 These are small chili peppers that are stuffed with tuna, anchovies, capers and parsley and put in a mixture of wine vinegar and EVOO.

La Favorita products are free of preservatives and artificial coloring. Serve these little fish stuffed peppers as an appetizer or as part of a really elegant antipasto. 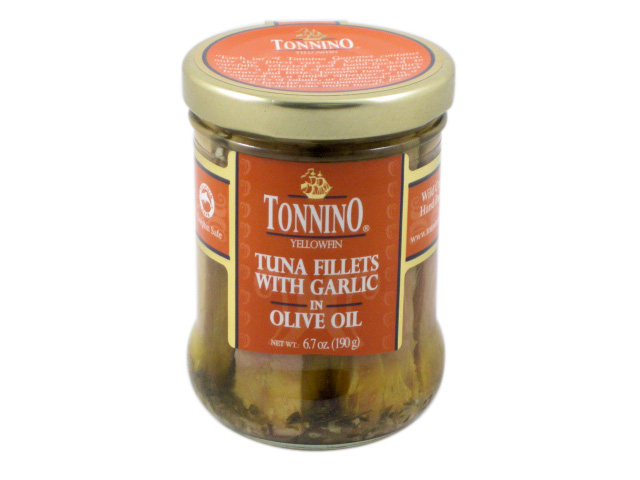 Yellowfin tuna is an excellent fish with great versatility. These tuna fillets are hand packed in olive oil and garlic. They can be used in pasta, in a typical Italian salad, an an hors d'ouevres, and served on crackers or bread.

Tonnino prides itself on presenting a gourmet product that features tuna that is wild caught and dolphin safe. Their products contain no additives, fillers or preservatives. 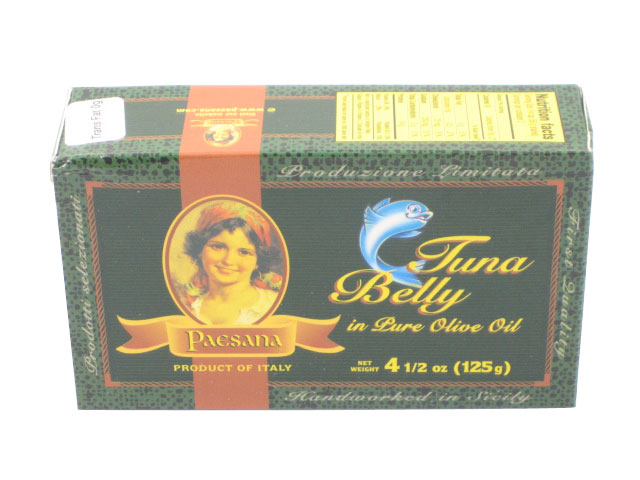 Ventresca Tuna by the case

This type of tuna product is very different than the commercial canned tuna readily available in the US. This starts with yellowfin tuna fillets that come from the belly of the fish, which is the richest cut of meat. It is thinly sliced and packed in olive oil and a tiny bit of salt.

Eat this on its own, perhaps with a little cracked pepper and course salt on top. Well - a little crusty bread on the side would be good too!

Bonita Tuna is caught daily and canned by this artisan food producer from Spain. The tuna is preserved with olive oil, salt and wine vinegar from Rioja. The tuna is sold under the brand name of MariaJesus.

Tuna prepared in this fashion is delicious on its own. Add it to a fresh salad or pasta and you will have a lovely dish. Or consider having this as an appetizer with some great crackers or good bread - way yum! 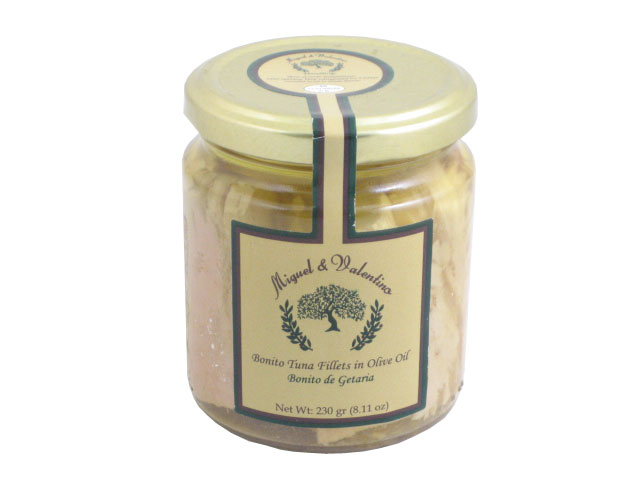 Line caught Bonito del Norte tuna is packed in high quality olive oil to preserve it and to keep it moist and tender. This is outstanding tuna from a well known and respected producer.

Sometimes terms are used in different ways in different countries. So - to keep things straight… Bonita del Norte tuna (in Spain) is identical to Albacore tuna in the United States. They are both the species Thunnus alalunga.

Sardines are enjoyed by many cultures and are part of the cusines of many countries. If you have never tried sardines, consider purchasing one of these high quality brands for your first taste. If you already love sardines, then you should be really pleased with these fine offerings from Les Mouettes d'Arvor in France. 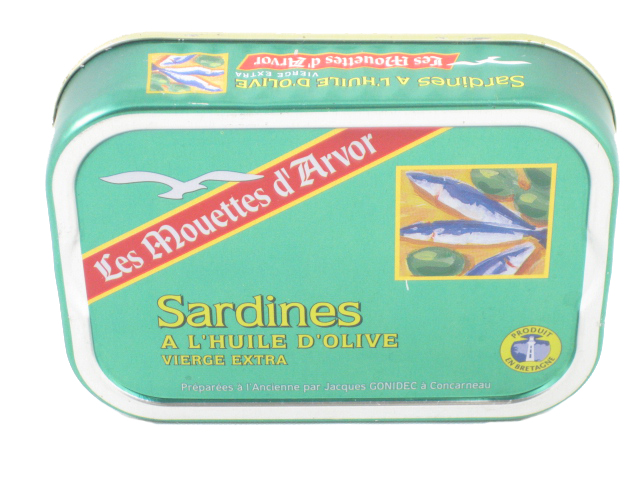 Sardines in EVOO by the case

These sardines are caught off the southern coast of Brittany, France using sustainable fishing practices. The sardines are preserved in extra virgin olive oil. By the way, the olive oil dissolves the bones, so these can be eaten whole. You can devour these wonderful fish treats as a snack. Or use them in pasta dishes, salads. Some people swear the only way to eat these is on saltine crackers and topped with mustard and hot sauce! 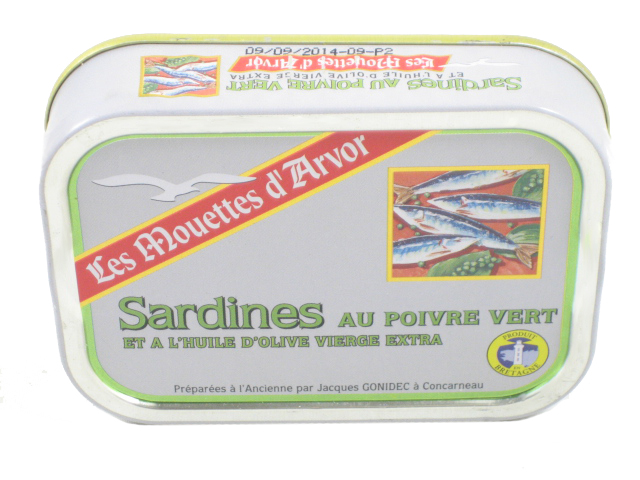 Sardines in EVOO with Green Peppercorns

Sardines in EVOO with Green Peppercorns by the case

The sustainable fishing practice of this company allows you to enjoy these sardines with vigor! These sardines are packed in extra virgin olive oil and then green peppercorns are added to give the fish some heat and spice. Sardines can be eaten whole (yes, the bones have dissolved). Try these on a bagel with cream cheese, onion and capers. Or saute these and toss with spaghetti - a classic Italian favorite.

Sardines in EVOO with Lemon

Sardines in EVOO with Lemon by the case

If you love sardines, then these will be a treat for you, as they are not only preserved in high quality extra virgin olive oil, but they have a touch of lemon added to them. Consider sauteeing these and tossing them in pasta with some added lemon zest. Or put some in your next batch of scrambled eggs or on top of a fried egg. Or just give in and eat them straight out of the tin! 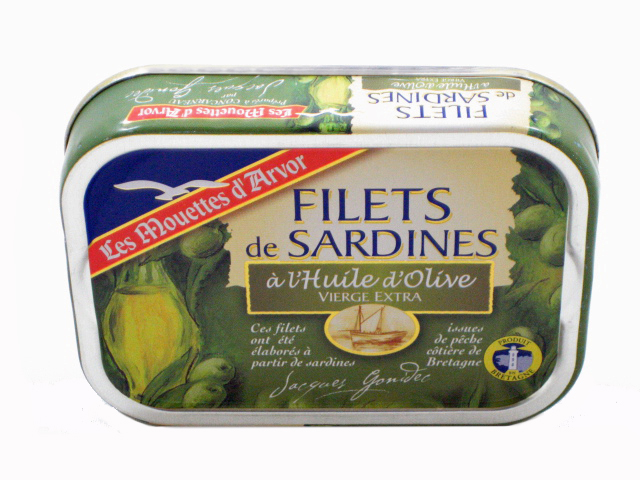 Sardine Fillets in EVOO by the case

Sardines are an amazing fish that can be eaten in so many different ways. These come in fillets and are packed in high quality extra virgin olive oil and a tiny bit of salt. Melt in your mouth! Put them onto a great antipasto platter, on pizza, in spaghetti, or in a classic Greek salad. Use your imagination when preparing your next meal - I bet you can figure out how to add a sardine or two, or three!

Jacques Gonidec founded the company, Les Mouettes d'Arvor, in 1959 in Concarmeau, Brittany, France. He uses only sustainable fishing practices to catch the sardines. It is the last sardine cannery that remains in this town.

Do you love Italian cooking and pasta? There are some really intersting pastas out there. Try one of these the next time you want to experiment with something new. 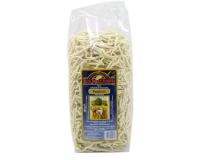 This pasta shape is thin and tightly twisted. It is one of the traditional shapes of Ligurian pasta. The twist shape holds sauces well. Consider doing a pesto sauce with this.

Better yet, chop up some fresh herbs, throw those on the cooked pasta along with some excellent grade butter. Serve this with a nice piece of grilled fish or a simply prepared shellfish course.

Mezzaluna means " half moon " in Italian, and that's exactly what this pasta looks like - little half moon shapes. They are a delight to eat! This particular type is filled with yummy gorgonzola cheese.

Recipes abound for this type of pasta, but the simplest is to cook it up and toss it with butter and an herb of your choice. Like many pastas, this would work well served with grilled fish. No preservatives are used in the making of the pasta. If you've never tried these little stuffed wonders, now is the time!

Croxetti is an ancient form of pasta that was originally made by nobility in northern Italy. Thin sheets of pasta were pressed betwen two wooden molds to create small round discs. On one side of the mold was the family crest and the other side had a symbol, often a cross.

This croxetti, also known as coin pasta and sand dollar pasta, has a sheaf of wheat on one side and the coat of arms of Val di Montoggio on the other. This artisanal pasta is made by Alta Valle Scrivia near Genoa. Traditionally this pasta is prepared with a fish or pesto sauce. Try some for yourself and experiment with these dumpling like treats! 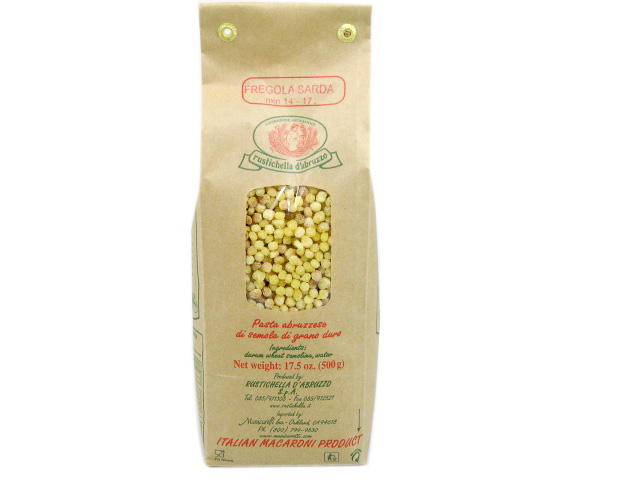 The pasta is made with high quality durum wheat and mountain water. Passing it through bronze molds gives it its characteristic rough texture - perfect for holding sauces! This particular shape, fregola sarda, is a toasted pasta and is made by hand. Think of it as the Italian version of couscous. It is perfect in a shellfish broth by itself.

The company, Rustichella d'Abruzzo, is family owned and operated, in Abruzzo, Italy. The Peduzzi brothers concentrate on smaller markets, allowing them to continue to create a homemade, slow dried, high quality pasta. 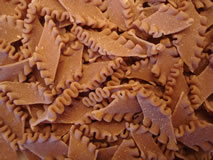 This pizzichi, aka pinched pasta, is made from 100% farro flour. Farro looks like spelt. And although it is a type of wheat, because it is non-hybridized, many people find this easier to digest than durum wheat pastas. This particular shape of pasta has curly edges. It makes a great dish with sea scallops.

This artisinal pasta is made in the town of Pianella, in Abruzzo, Italy. The pasta maker, Gianluigi Peduzzi, carries on his family's tradition in the business, which started in the early 1900's. 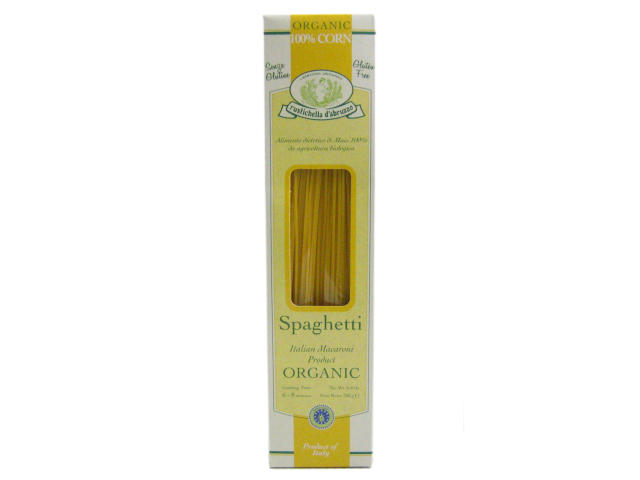 This pasta is made from organic ground corn and spring water, from northern Italy. It has a slightly sweeter, and definitely nuttier taste than wheat pasta. If gluten or wheat is a problem for you, or perhaps you're looking for a healthier alternative once in a while - try this!

Rustichella d'Abruzzo is a family company in Abruzzo, Italy. They still make pasta by hand and have a nice line of organic spaghetti and other pastas. 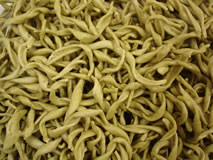 Strozzapreti shaped pasta roughly translates to priest stranglers. This is a durum wheat pasta that has broccolini added to it, yielding a wonderful flavor and pleasing light green color. The pasta is formed with bronze molds to keep the surface rough. This allows sauces to adhere particularly well to the pasta. Cara Nonna pasta is made in southern Italy, in the Apulgia area.

Consider creating a wonderful main dish with strozzapreti and a seafood sauce. Jamie Oliver has a great recipe for broccoli and anchovy strozzepreti. It could only be made better by having a little of the broccolini flavor already in the pasta! 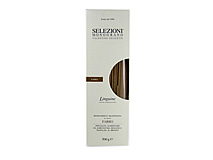 This linguine is made from organically grown farro in Umbria, Italy. Farro is easier to digest than durum wheat pasta and is a nice alternative in terms of both taste and texture.

Linguine roughly translates to little tongues or tongue shaped. This flat noodle is wider than spaghetti and thinner than fettuccine. Almost all classic pasta with seafood dishes are made with linguine. Think about the last time you went to an Italian restaurant; surely linguine with clam sauce was on the menu!

The brand name is Selezioni Monograno, made by Valentino Felicetti. The company is dedicated to preserving the environment and using authentic old world wheats in their production of unique pastas.