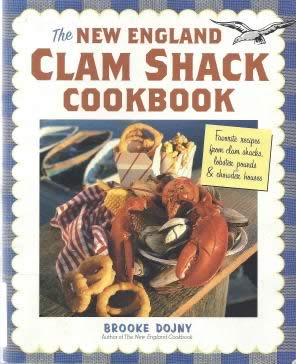 Clam Shacks, Lobster Pounds, and Chowder Houses. Do you know what these are? This really interesting cookbook details Ms. Dojny's search for the 25 best examples of each of these classic yet humble eateries. They are mainstays of the New England landscape of food, and are not to missed on your next trip anywhere north of New York City!

A clam shack - what is it? Well, it's a small family run place (usually) where you go up to a window, order your food and wait for your number to be called. Then you go get your own food and sit at a group picnic table or back in your car and devour the grand seafood that's on your paper plate! Clam shacks usually serve - ah - clams! In all forms - from fried strips (yes please), loaded up on these cool split rolls, in fritter form, and baked and stuffed. You might as well have a side of fries and coleslaw while you're at it.

Now to the lobster pound - think you know what it is? It's a place where lobsters are kept alive before they're shipped out to market. Giant vats or cauldrons are set up at these "ponds" - and you go up and order your lobster by the pound or size. The purveyors then cook your lobster for you, usually combined with corn on the cob and either steamers or mussels. Then, your number is called and you up and get the goodies! Just like clam shacks you eat at a communal picnic table or in your car. Plastic lobster bibs are a staple along with great food.

Finally the chowder houses - think you know what these are? They serve pretty much what you can get at both a clam shack and a lobster pound, plus other seafood treats such as fried fish plates and of course, all kinds of chowder. The main difference is that these are "sit down" full service restaurants. I condsider these the equivalent in dining style to the east coast diner.

Not only is this cookbook an exploration of great New England seafood, but it's filled with photos of places I long to go to.

Don't miss the myriad of homemade dessert recipes - like the "Strawberry Rhubarb Pie" or the "Orange Freeze" (yes, I think of that as dessert!), "Whoopie Pies" and the infamous "Portuguese Bread Pudding".

Shrimp and grits - now that's pure southern cooking! In this lovely cookbook, Ms. Dupree reveals that there are different kinds of southern shrimp and grits recipes, and the origins of these are not what you might think. For example, when Jewish immigrants migrated to the southern states, they brought with them their own version of shrimp and grits. Their version consisted of grits with fried salt herring. The herring was soaked overnight to leach out the brine.

There are nice tidbits about shrimp in here. For example - heads on or heads off? What do you do with the black vein that runs down the back? What sizes of shrimp are there and how many are there to a pound?

On to the grits ~ which is simply a form of ground corn, as are polenta and hominy. You can call grits "hominy grits" but you can't call polenta "hominy polenta". Whatever you might want to know about grits is in this cookbook.

On to the recipes that look especially fine:

This cookbook not only shows off the many true southern varieties of shrimp and grits, but takes you into the versions that are Indonesian, Thai and Mediterranean.>If you've never cooked grits before and are intrigued by the idea then you'll be pleased with this book. If you're a grits expert - this will take you to a new level! 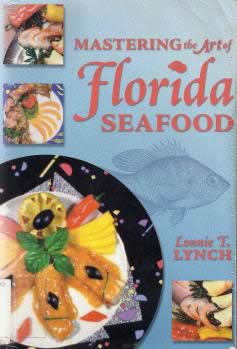 Did you know that alligator is considered a seafood? Well, it is. And the recipes in here show you how to prepare it in various yummy ways (yes - it really is good). Chef Lynch also makes use of conch, soft shell crabs, stone crab and blue marlin in his recieps.

Although there are no photos in this book, don't let that put you off. There are recipes and tips in here that are generously shared by this professsional master chef. The sauces, dressings and coulis recipes are varied and look wonderful. The accompaniements are numerous and the recipes look interesting and intriguing. 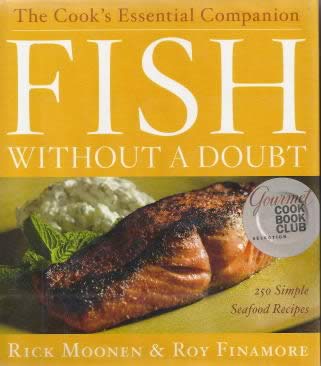 The intro to this large volume sums up the book's intention: "to give you the tools and information you need so you can cook fish with the confidence of a pro".

One of the sections that is really neat has black and white photos that demonstrate how to fillet different shapes of dish and how to clean many kinds of seafood.

Many recipes are preceded with "Accept Substitutes". They offer alternate ingredients – usually in the form of a replacement for the main fish or seafood ingredient. If you want to cook fish, this is a terrific fish recipe encyclopedia!

At its heart, this is an Italian cookbook. But don't confuse that with the traditional spaghetti with clam sauce variety cookbook. It's far from that!

The authors have recipes for fish on the grill, "crudo" (read sushi or raw fish dishes), and fish and seafood that is sauteed, roasted, baked, poached and fried.

There's a recipe for Fettucine with Rock Shrimp, Corn and Jalepeno that looks devine – and simple to make. The Cod with Early Fall Vegetables has my mouth watering.

There are nice, small subsections on things like dealing with tentacles, filleting whole fish and the various types of salmon that are out there.

Mario Batali wrote the forward to this book – and considers himself a good friend – that's saying a whole lot!

The recipes in this cookbook are absolutely "do-able" in your own kitchen. The ingredients are readily available (for the most part) and the preparation and cooking are well within the realm of most decent home cooks. 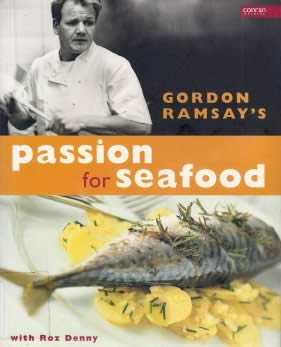 People buy cookbooks for all kinds of reasons. This one screams the reason – the PHOTOS. This is some of the most magnificent food photography I have ever seen.

This is definitely not your everyday type of cookbook. It is a small treatise on seafood. There are really interesting sections at the front of the book, that discuss in loving detail, everything from the different types of seafood, to the tools one should have, to the quantities to purchase. Chef Ramsay goes on to talk about how to prepare fish ~ filleting round fish, filleting salmon, skinning, pinboning and more.

Next are the sections on how, exactly, to cook fish, simply. Moving on, he discusses his favorite stocks and sauces. Depending on your level of expertise some of these recipes will be well known, such as a basic fish stock. Others, like a Red Pepper Sabayon or Rouille with Fresh Harissa, may fall more into the purview of the professional chef.

To be brutally honest, there's just no way I'm ever going to prepare most of these recipes. If I had my own sous chef and prep cook then that would be a different story! But if you are someone who has cooked a lot, you can definitely read the recipes and adapt them to create a simpler, less complex version.

There are a few recipes for accompaniments that I would try without hesitation. Small side things that can be made on a day when there are no pressures to put dinner on the table. The Oven-dried Tomato Crisps look great and the Candied Lemon looks even better.