Seach our site below 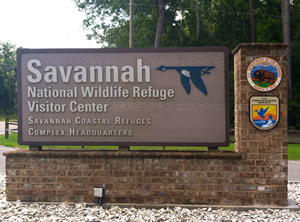 Savannah National Wildlife Refuge ~ Laurel Hill Wildlife Drive
Coming from the EAST ~ 2.3 miles west on 170 / Alligator Hwy from the intersection of 170 and 17

Coming from the WEST ~ 3.25 miles from the intersection of 30 and 25 in Port Wentworth, Georgia

Established April 6, 1927, Savannah NWR consists of over 29,000 acres of freshwater marshes, tidal rivers and creeks and bottomland hardwoods. The refuge is located in the heart of the Lowcountry, a band of low land, bordered on the west by sandhill ridges and on the east by the Atlantic Ocean, extending from Georgetown, South Carolina to St. Mary's, Georgia. 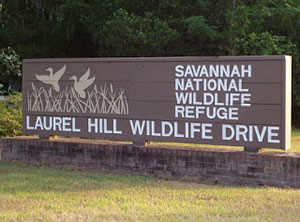 Known for it's rich flora during the humid summer months, the region also supports a diverse wildlife population. The variety of birdlife within the Lowcountry is enhanced by its location on the Atlantic Flyway. During the winter months, thousands of ring-necked, teal, pintails, and as many as ten other species of ducks migrate into the area, joining resident wood ducks on the refuge. In the spring and fall, transient songbirds stop briefly on their journey to and from northern nesting grounds.


Savannah NWR is one of seven refuges administered by the Savannah Coastal Refuges Complex. This chain of national wildlife refuges extends from Pinckney Island NWR near Hilton Head Island, South Carolina, to Wolf Island NWR near Darien, Georgia. Between these lie Savannah (the largest unit in the complex), Wassaw, Tybee, Harris Neck, and Blackbeard Island refuges. Together they span a 100-mile coastline and total over 56,000 acres. The Savannah Coastal Refuges are administered from headquarters located in Savannah, Georgia.

The Millstone Boat Ramp in Jasper County, South Carolina gives a place to launch into the Savannah river and explore the upper reaches of the park from the water.

Tybee NWR was established on May 9, 1938, by an executive order of President Franklin D. Roosevelt, as a breeding area for migratory birds and other wildlife. Located in the mouth of the Savannah River, the 100-acre refuge began as a one-acre oyster shoal, Oysterbed Island, used by the U.S. Army Corps of Engineers (COE) as a spoil disposal site to support their mandated harbor dredging activity. As a result, the majority of the refuge is now covered with sand deposits. The more stable portions of the island are densely covered with such woody species as eastern red cedar, wax myrtle, and groundsel. Saltwater marsh borders parts of the island.

The refuge is an important resting and feeding area for migratory birds including gulls, terns, neotropical migratory songbirds, and shorebirds. Least terns, black skimmers, Wilson's plovers, and several other shorebird species have nested on the spoil deposits on Tybee. During all seasons, the refuge's shoreline and open spoil deposits are used as resting sites for brown pelicans, gulls, and terns. Endangered species, including piping plovers and wood storks, have been observed on the refuge land, while shortnose sturgeon and manatees have been found in the waters bordering Tybee. With the use of telescopes, birdwatchers observe the refuge birdlife from levees located across the river within Fort Pulaski National Monument.
This text came directly from the U.S. Fish and Wildlife Service website page for Tybee Island NWR