How To Keep Fish Fresh While Fishing

Fish are one of the most perishable foods that we eat. Fish decompose at a much faster rate than red meat and game. And, bacteria grow and spread quickly on fresh fish. The goal is to preserve the flesh as quickly as possible.

Don't let the fish die on its own. After you've caught a fish to keep, you do not want it to die on its own. If the fish thrashes around, whether on the deck of the boat, in a fish bin, or in a bucket, the meat will be bruised and this will change the taste of the fish. If the fish takes a long time to die, the stress of that will also increase the odor of the meat. Plus, it's a lot more humane to kill them quickly.

Keep the fish alive or get it into crushed ice immediately.

Whether you're fishing from a boat, a fishing pier or from the shore, you need to decide how you're going to handle the fish once you catch them. The choice is to either keep them alive or get them into ice.

Whatever method you use for keeping your catch fresh, if you get home and have any doubts at all about the freshness of the fish, throw it out.

Note: if you opt for keeping the fish alive while you're fishing, you need to get them home in the freshest condition possible. This means that you will still need to use one of the ice methods below. Unless, of course, you're going to eat them within 5 minutes of pulling them out of the water! 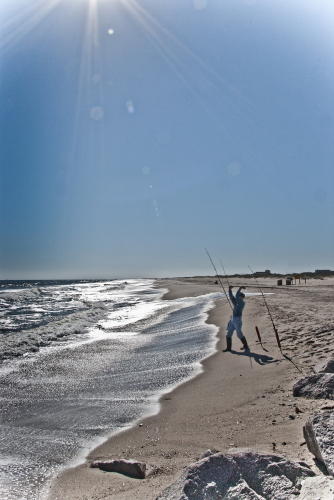 How to get your fresh fish home safely - Ice It!

If you already have your freshly caught fish iced down in your cooler, then you're good to go! Remember to drain off any water in the cooler before starting home. If you don't have your fish already on ice, then you need to do that. Look at the icing methods above for instructions.

How To Keep Mollusks Fresh While You're Catching Them

Just like fresh fish, shellfish are very perishable; much more so that red meat or game. It's important to follow safe handling procedures while you're catching, digging or harvesting shellfish. 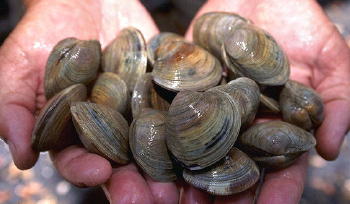 While clamming, oystering, or harvesting mussels…

Once you get home, transfer the shellfish to a colander, or a container with holes, and cover them them wtih a clean moist towel. The shellfish need to be able to breathe, so you should never cover them with water. Put them in the refrigerator like this. Keep the towel moist until you're ready to cook them – this should be within 2 or 3 days at most. Remember to check and make sure that they are still alive. Do not store clams, mussels or oysters directly on top of ice. It's important to keep them cool, but you don't want them to freeze. Don't store them in plastic bags either – they will suffocate.

Before you cook or serve mollusks in the shell, they need to be alive.

How to tell if a clam or mussel is still alive…

How to tell if an oyster is still alive…

How to tell if a scallop is still alive…

How To Keep Shrimp and Crabs Fresh While You're Catching Them

While catching your own shrimp…