Her upbeat personality is infectious! Her smile is warm and genuine, and her style of Southern cooking has brought her notoriety.

Paula Deen officially started her food career in 1989 when she created a catering business out of her home, called "The Bag Lady". She made sandwiches and meals that were delivered to people in their homes. Her two sons, Jamie and Bobby, helped her deliver those first "love and lunch in a bag" meals and remain in the food business with her to this day. Both sons have also gone on to create their own careers in the world of food-dom.

In 1996, Paula opened her first restaurant – The Lady & Sons, in downtown Savannah. It was wonderfully successful and she soon began to look for a much larger space. Once again, she took a huge gamble and began purchasing parts of a block in the historic district. In 2003 the restaurant opened in the newly renovated building, with the capacity to seat 330 people. The restaurant is still thriving, as are Paula and her sons!

Ms. Deen announced in January of 2012 that she has been dealing with Type 2 diabetes for three years. In a quote to Associated Press, she summed up how she's dealing with it in her public persona: "I've always said, 'Practice moderation, y'all.' I'll probably say that a little louder now." So enjoy her food, restaurants, and recipes, just take smaller portions!

She is now involved with 6 restaurants and all feature the southern food that she helped make popular once again. If you're in the area, drop by one of these.

Paula loves seafood, and dishes in her restaurants include a Crab Stuffed Portobello, Savannah Crab Cakes, and the classic southern dish, Shrimp and Grits. Her buffet at The Lady & Sons restaurant almost always has a Low Country Boil.

If you're looking for new seafood recipes, her website has more than 150. Most dishes have a definite Southern flair and are a pleasant change when you really want to make something new and different. The Black Pepper Shrimp and Grilled Tuna with Olive Tapenade sound especially good.

Paula Deen has 11 cookbooks to her credit and a terrific bi-monthly magazine.

What is comes to seafood, Chef Rick Moonen is one of the most influential people in the world of culinary arts. 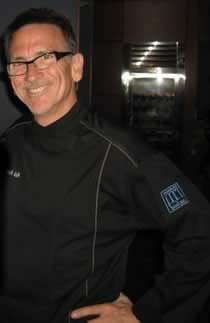 His resume reads like a who's who in the chef and restaurant world.

He graduated 1st in his class at the Culinary Institute of America in Hyde Park. His training, apprenticeships, and then mastery included working at and with: L'Hostellerie Bressane with Chef Morel, La Cote Basque, Le Cirque with Alain Sailhac, Le Relias, Century Cafe, Chelsea Central and the Water Club with Buzzy O'Keefe. Then on to Oceana, Molyvos, and rm (in New York) where he garnered three stars from the New York Times.

His most recent endeavor is the restaurant, rm seafood, inside Mandalay Bay in Las Vegas. And, it is ALL about seafood!

Dinner is really about picking your fish by the species; Arctic Char, Turbot, Cobia, Black Cod, Red Snapper and then tasting how delectable these can be in the hands of great chefs!

Not only is this man brilliant with preparing seafood, but his passion extends deep into the world of ocean conservation and sustainable seafood. He is one of the more vocal proponents of sustainable fishing practices, and truly practices what he preaches.

In 2008 he co-wrote a really terrific seafood and fish cookbook, Fish Without A Doubt. Loaded with photos of how to fillet fish and interesting recipes for cooking fish, this is a cookbook worthy of the shelves of even the most seasoned chef.

If you're searching for the best crabcake recipe, follow along with Chef Moonen's classic recipe.